What is the difference between Intel Core i3, i5, i7 and i9?

If you’re wondering whether you need a Core i3, i5 or i7 processor for your next upgrade or brand new PC, then take a seat and we’ll explain the differences to help you make the correct choice

The general rule is that as you move up from the i3 to the i5 and then the i7, the more power (and more expensive) the processors get.

These days, even a basic dual-core processor is fast enough for undemanding tasks. This means that whether you’re buying a laptop or a PC, Windows should run perfectly well on even a budget model.

Essentially, if you just want to do all the normal things people do with their computers – email, web browsing, YouTube, editing and sharing photos, Microsoft Office – a basic processor is fine.

If you’re reading this during the process of trying to choose a budget laptop, know that one of the most influential components for overall responsiveness is the hard drive. It’s worth sacrificing a Core i5 processor for an i3 if you can get an SSD instead of a traditional hard disk for the same sort of price.

How many cores do I need?

You rarely, if ever, see single-core processors anymore and you should avoid these at all costs. More cores mean more performance, plus the ability to run multiple applications at the same time. You should see an improvement in its performance compared with running it on a computer whose CPU has fewer cores.

Don’t just look at the number of cores, though. Intel proce 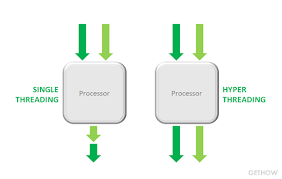 ssors often support Hyper-threading which effectively allows it to handle twice the number of ‘threads’ and is a bit like having double the number of cores, albeit virtually.

A thread in computing terms is a sequence of programmed instructions that the CPU has to process. If a CPU has one core, it can process only one thread at once, so can only do one thing at once. It’s actually more complex than this, but the aim here is to keep it simple and understandable.

Hence, a dual-core CPU can process two threads at once, a quad-core four threads at once. That’s twice or four times the work in the same amount of time.

Hyper-Threading is a clever way to let a single core handle multiple threads.

A Core i3 with Hyper-Threading can process two threads per core which means a total of four threads can run simultaneously. The current Core i5 range of desktop processors doesn’t have Hyper-Threading so can also only process four cores. i7 processors do have it, so can process eight threads at once. Combine that with 8MB of cache and Turbo Boost (below), and you can see why Core i7 chips are more powerful than an i5 or i3.

Core i3 processors don’t have Turbo Boost, but i5 and i7s do. It means that Core i3 chips tend to have quite high ‘base’ clock speeds.

If a processor model ends with a K, it means it is unlocked and can be ‘overclocked’. This means you can force the CPU to run at a higher speed than its base speed all the time for better performance.

The current range of 8th generation Intel Core processors for desktops is pretty vast, with several different processors for each i3, i5, and i7 category. These have the codename Coffee Lake.

You’ll find some examples of the processors below.

Many Intel processors have a GPU – the graphics chip – built into the CPU.

These graphics are good enough for everyday tasks, but if you’re planning on doing any gaming or video editing, then you’ll want to investigate a stand-alone graphics card for your system too.

There is a more powerful series of processors available, which is the Intel Core i9.

These aren’t really aimed at consumers, and while you can put them into your PC (assuming your motherboard can take it) they are usually reserved for software that requires much more excessive processing power, such as running a server or a powerful workstation.

You’d be forgiven for being confused at this point. It’s not possible to look at a processor’s specifications and make a decision about which is fast enough for you.

That’s why we rigorously benchmark every laptop and PC we review. This tests the whole-system performance, not just the CPU. It’s the processor, plus the memory (RAM) and hard drive – along with the graphics card, too – which determines how quick a PC or laptop is.

So it’s crucial to read reviews before you buy one. Here are the best laptops you can buy right now and also the best PCs.

There are other factors besides performance, such as the amount of power a processor uses. Newer processors are generally always more power-efficient, which is important in laptops.

Similarly, if you’re going to be running very demanding software such as video editing or encoding programs, then you may want to go for a Core i7. But for most people, this is overkill.

If you’re after the best battery life, look for a processor with a model number ending in U, or with a Y in it. These use the least power, but also deliver slower performance.

Finally, don’t forget AMD. It’s new range of Ryzen processors for PCs are excellent value and the Ryzen 5 chips are better value than Intel’s Core i5.